Samsung Galaxy S3 review and full phone specifications in details. The reasons behind its popularity unrevealed. 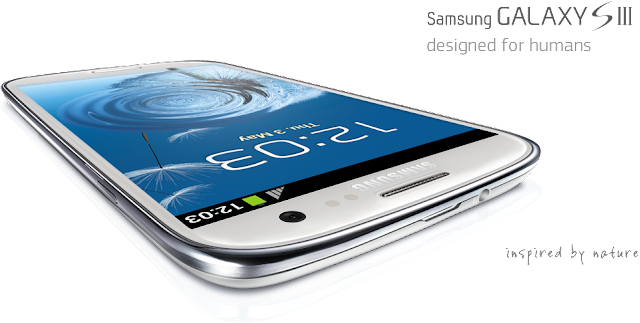 The Samsung Galaxy S3 ( GT-i9300 ), Designed for Human and Inspired by Nature is an Android Smartphone designed by Samsung and the successor to the Samsung Galaxy S2. Like its Predecessor, the S3 is Touchscreen Based, Slate Sized Smartphone, with a significant addition of Software Features, Expanded Hardware, and a Redesigned Physique. In particular, it has an Intelligent Personal Assistant (S Voice), Eye-Tracking Capability, Wireless Charging, and Expanded Storage. The 4.8-inch ( 120 mm ) Smartphone is powered by a 1.4 GHz Quad-Core Processor.


Samsung Officially Unveiled the S3 on 3 May 2012 in London. The device was released in 28 countries, including those in Europe and the Middle East, on 29 May 2012, before being rolled out in several other countries over the following few days. Prior to release, 9 million Pre-Orders were placed by more than 100 carriers globally. A US release is expected in June 2012. Based on a survey in the UK, as of June 2012, the Samsung Galaxy S3 is the most Popular Handset in the UK.

Watch out this Officially Released Video of Samsung Galaxy S3, Designed for Human and Inspired by Nature. You will get a brief Idea about the Phone after viewing this Video. After this Read the Full Samsung Galaxy S3 Phone Review and Specification in Detail. 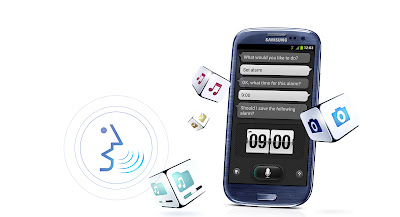 S Voice is a Intelligent Personal Assistant and Knowledge Navigator which works as an Application for Samsung's Android Smart Phones ( Similar to Apple's Siri ). It responds to You, i.e. You can Tell the Phone to Wake Up, Answer an Incoming Call, or even take a Photo.
The Application uses a Natural Language User Interface to Answer Questions, make Recommendations, and Perform Actions by delegating requests to a set of Web Services. 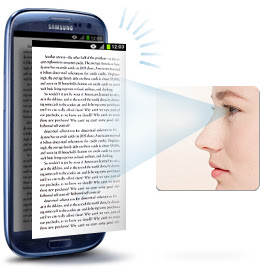 One of the other big-hitting features Samsung is talking about is the ability to Track your Eyeballs to make sure the Display Stays Lit when you're looking at it. In theory this should mean that you can keep the Screen Timeout to a minimum of Fifteen Seconds and then Never have to Worry about it Turning Off. A little Eye Icon ( Eyecon ) Appears in the Notification Bar when it's Tracking your Peepers. It waits till you're Asleep, the Screen maintains a bright Display as long as you're looking at it.

In practice it works around 75% of the Time, even in Bright Light it can sometimes still Turn Off the Display, despite the icon Showing up. In fact, the Icon can Pop Up even when you're Wearing Sunglasses - so it's hard to trust it. 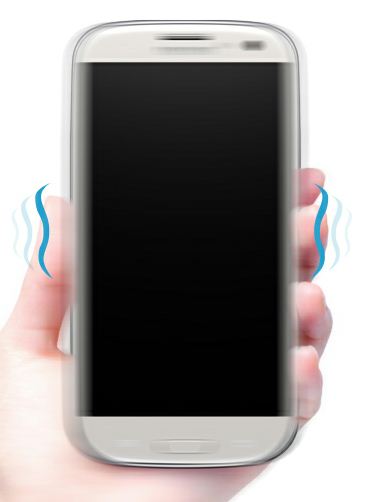 Smart alert takes the Motion Sensor in the Phone and Sends you a Vibration Notification if you have any Notifications that you haven’t Cleared yet. What is most likely happening here, if the phone picks and chooses what notifications to tell you about via Smart Alert, there is likely a White-List of sorts that allows you to set notification type for Smart Alert.It knows when you've been away from your phone: a vibrating nudge lets you know that you have missed calls or messages. 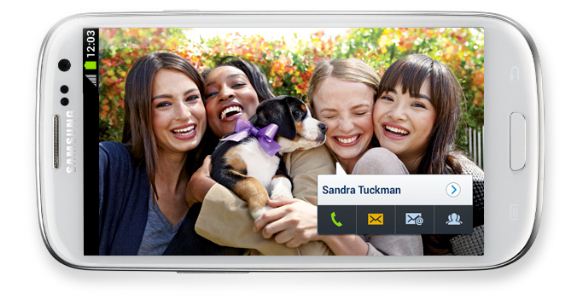 The most Interesting Intelligent Functions of the Galaxy S3 is the Social Tagging Feature. According to Samsung, the Galaxy S3 is capable of Identifying and Properly Tagging the people in your Photos as long as you have them added as Contacts ( with an attached picture ). If this Face Recognition Software works as Samsung claims it does, it is one of the most Interesting Smartphone Capabilities ever.

The Social Share ability takes matters one step further, by allowing you to instantly Share the Pictures with the contacts the S3 has recognized in the photo.It keeps track of your loved ones, a glance at your friend's photos will show you their current SNS status. 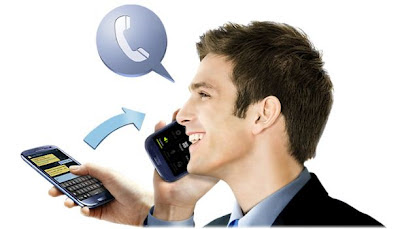 Direct Call allows you to make a Call simply by Lifting the Phone to your Ear while writing a Message to Someone, or while Specific Contact Details are brought up to the Display. Just lift, and Speak. It's a nice Feature to have but we can think of many Scenarios where this could Go Wrong. It knows when you want to talk. 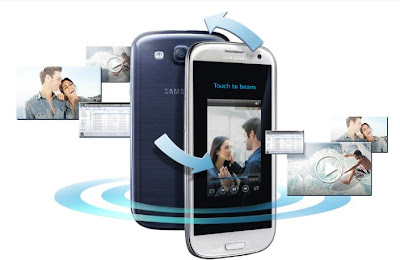 Sharing your Content with Friends nearby should be Easy, Quick, and even Fun. S Beam lets you Bond Instantly so you can Transfer Documents, Contacts, Pictures, Music, Videos, you Name it. Just put the Backs of your Phones Together, Connect, Share and Enjoy.

The biggest issue that S Beam will face initially would be with the compatibility. As Samsung rolls out more devices that are S Beam compliant, the service will become useful to anyone with multiple Samsung Devices. The Features being Implemented here will be unique to Samsung, and will further encourage users to stick with Samsung with all Devices moving forward. 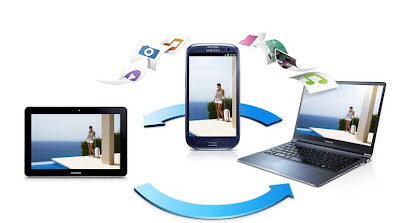 There’s another way to Share content on various Devices. It’s called AllShare Play, and it lets you share with everyone, Access Documents and Multimedia even when you're away from your Computer. It lets us work together through the magic of DLNA and Wi-Fi Direct, giving us Remote access to Documents and Multimedia files when we Work on a different Screen somewhere else. 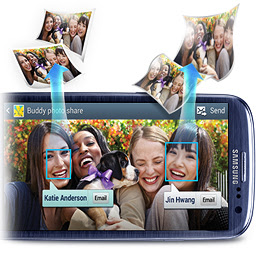 It Shares with Everyone instantly. As the Phone recognizes your Friends' Faces, it can Share Photos with them instantly. It works using Facial Recognition Technology to identify each of your Subjects, then shoots the Picture to them Automatically via Email or Text Message. 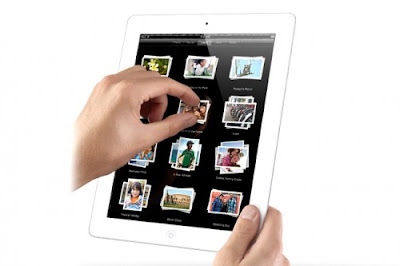 This Facial Recognition Feature Highlights Individuals Standing ( or Seated ) together in a Group, letting you simply Double Tap on a Face to Fill the Frame. It doesn't appear to be much different from the Traditional Double Tap Zoom Option, but this method Enables a Bit more Precision. 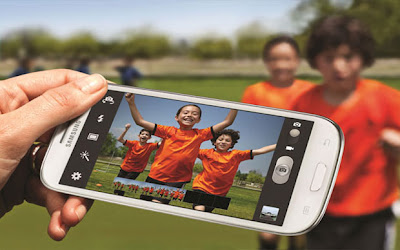 You might find Facial Slideshow Entertaining, especially when it comes to making out Individuals in a Huge Group Shot. The Feature essentially creates a Slideshow from One Image, Cycling through Portraits of each Person in the Frame. 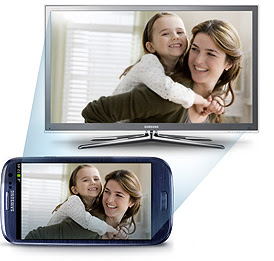 It lets you play together, Beam your Photos, Videos and even the Game you're Playing onto the Big Screen while your Phone Doubles as a Controller. 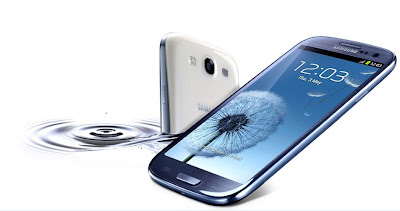 Inspire by Nature, the Minimal Organic Design of the Samsung GALAXY S3 is reflected in its Smooth and Gentle Curves, while its Human Centric Nature Provides an Ergonomic and Comfortable Experience with Enhanced Usability.

Samsung Galaxy S3 has Brushed Poly-carbonate Body with " Marble White " and " Pebble Blue " Colors. It's Dimensions are 136.6 x 70.6 x 8.6 mm, despite still having to Pack in a 4.8-Inch Super AMOLED HD Screen. The plastic feeling of the Samsung Galaxy S3 won't appeal to all. It feels very Lightweight ( 133g ). 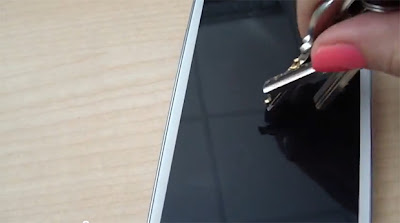 It has got a Really Solid Gorilla Glass 2 Front, a Well Packaged Interior and a more Robust Battery Cover.Compared to rest of the Galaxy Line, the S3 has more in common with the Original Galaxy S than the S2, with Curved Edges the Theme in the Design Language. 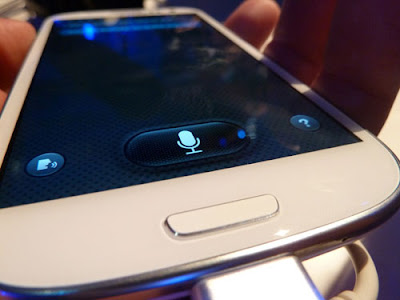 The Home Button has also been Elongated, although the same Menu and Back Buttons remain from the Prequel.The Button Design around the Phone has been well thought, as for a Phone this big it's very difficult to make all the Keys Accessible, so putting the Lock Button on the Right Hand Side rather than the Top makes a Large degree of Sense.

The Volume Up and Down Button is Parallel to the Lock key on the Left Hand Side of the Phone, and also within easy reach when Holding the Galaxy S3 in the Hand.

The MicroUSB Slot is placed at the Bottom of the Phone. The Battery Cover is also made of the same Polycarbonate Material as the rest of the Body. Yes, you read that Right, the Battery cover is Removable. 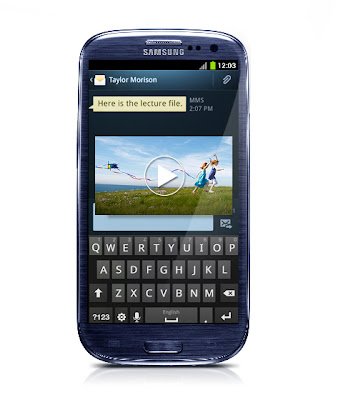 It lets you do Two things at Once i.e. Watch HD Videos as you Email or Text. Pop Up Play Lets you Play a Video anywhere on your Galaxy S3's 4.8 Inch Super AMOLED Display, on Top of Another App, that means you can watch a Video while checking your Email, and then Switch Back to Playing the Video in Full Screen Mode.

It's Picture-in-Picture, except instead of your TV it's on your Galaxy S3. We've seen some attempts at Multi Window Multitasking before from Samsung, with the " Mini Apps " on its TouchWiz Tablets, but this feature seems like it could be a big step Upward in Usefulness. 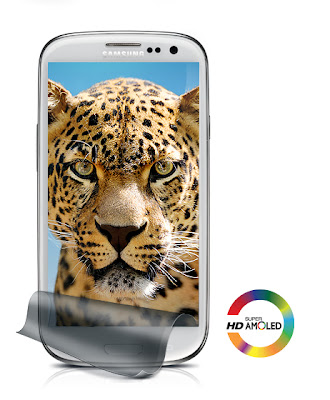 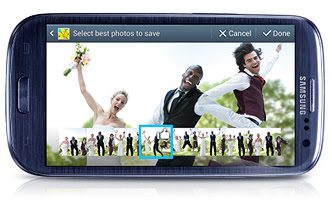 It sees your Best Side, Picks the Best out of 8 Continuous Photos. Galaxy S3 knows your Best Look, Never Misses a Smile or Mistakenly Captures someone when they are Blinking. It Automatically takes a Burst of 8 Shots, Capturing Continuous Scenes and Chooses the Best Image for You. 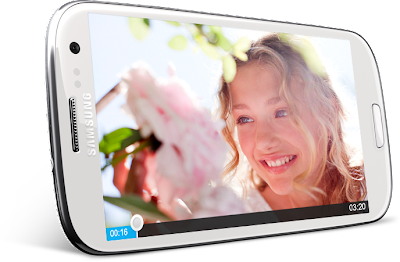 Long Term Evolution ( LTE ), marketed as 4G LTE, is a Standard for Wireless Communication of High Speed Data for Mobile Phones and Data Terminals. It is based on the GSM / EDGE and UMTS / HSPA Network Technologies, Increasing the Capacity and Speed using New Modulation Techniques.Samsung Galaxy S3 would be available with LTE Feature. Faster Downloads Compared with Current 3G Networks. And it's only going to Get Faster. 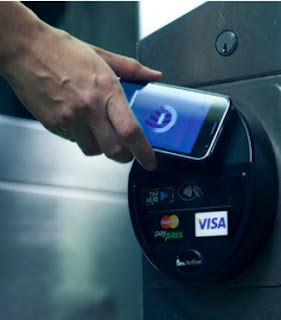 The number of Android Devices that Support Mobile Payment Systems is Increasing. Such facilities can be done through a Technology called Near Field Communication ( NFC ). Samsung Galaxy S3 have this Feature to allow users to use Mobile Payment Feature. 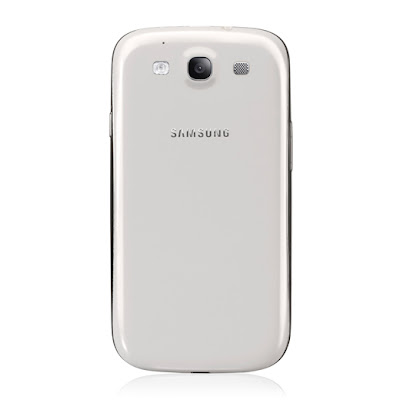 The Galaxy S3 has a 8 Mega Pixel Camera similar to that of the Galaxy S2.
It can take Photos ( 3264 x 2448 Pixels ) and record Videos in 1080p Resolution ( Full HD ). Samsung improved the Camera's Software over that of its predecessor to include Zero Shutter Lag and a Feature that selects the Best Frame after several similar Shots were taken. The Phone can also take Pictures while Recording Videos. 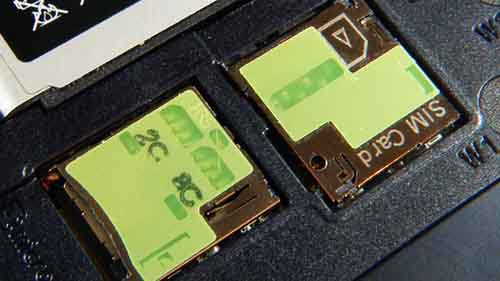 The Phone comes in 16 GB and 32 GB Variants, with MicroSDXC Storage Offering Up to an additional 64 GB for a Potential Total of 128 GB. An additional 50 GB of Space is offered on the Dropbox Service for Purchasers of the device for Two Years. 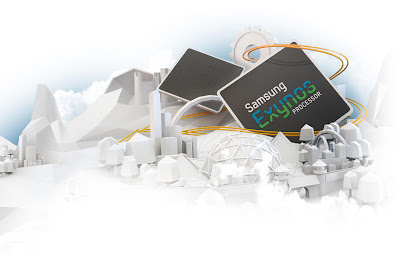 The International Version has Samsung's Exynos 4 Quad System on a Chip containing a 1.4 GHz Quad Core ARM Cortex-A9 CPU and an ARM Mali-400 MP GPU. However, the US version is expected to use Qualcomm’s Dual Core Snapdragon S4 SoC to support LTE Functionality. Dimensions of the Device are 136.6 × 70.6 × 8.6 mm and Weighs at 133 Grams with a 2100 mAh Lithium Ion Battery. The glass used for the Display on the Galaxy S3 is Corning Gorilla Glass 2. 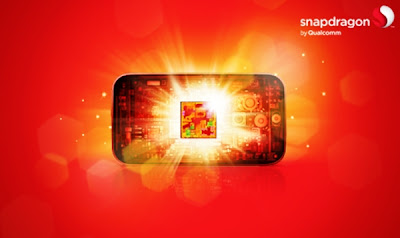 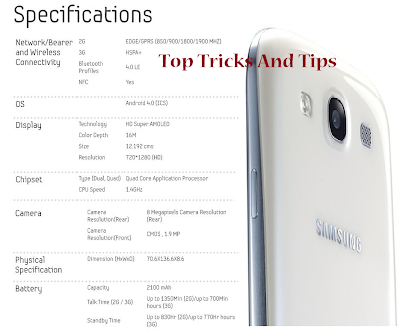 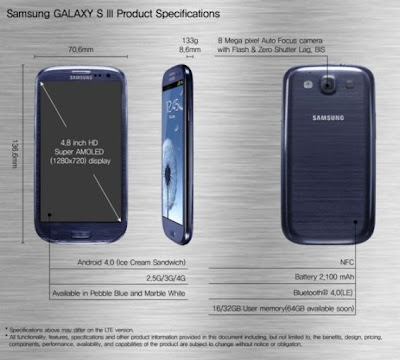 So all these are Basic and Great Features of Samsung Galaxy S3 Phone in Detail. Do you Like it ? Discuss and Share Below.